I watch a lot of horror movies and to be fair, most of them are fairly enjoyable for me. Even the shit ones I can enjoy for the gore or unintentional hilarity or cheap scares (except Devil’s Due – nothing can make that film good).

I watched Excision on Netflix recently and was more impressed than I thought I would be. I watched it because it looked like a bit of easy viewing, nothing to give me nightmares but maybe something to make me squirm. It is a fairly typical ‘nightmarish horror’ in many ways but a lot quirkier then the norm and well written with a black comedic script, which I wasn’t expecting but does give the film an extra star or two. 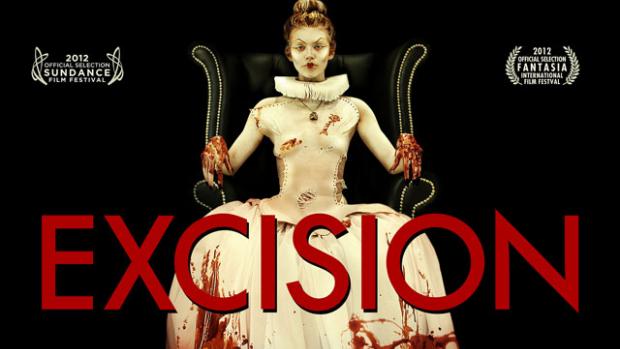 Our main character is Pauline (played by the amazing AnnaLynne McCord) – an unpopular, strange and withdrawn teenager who doesn’t get on with her mother (Traci Lords) who has ideas above her station and despairs of Pauline’s grungy clothes and greasy hair. Pauline doesn’t really care what her mother or anyone else thinks of her however and though she is odd and disliked by her classmates, there is a quiet confidence about her.

With aspirations of being a surgeon, a fascination with blood and very odd dreams that circle around dead bodies and necrophilia we can tell that some shit is going to go down.

I’ve seen a few people online who state that Excision isn’t ‘really’ a horror movie. I don’t know what else you’d call it though! It is psychological and undeniably has symbolism within the story and an important message to tell regarding mental health. But there’s a lot of gory scenes and Pauline’s dream sequences are creepy and bloody. When you take a minute to generally consider Pauline’s state of mind (as well as her mother’s) there is a very disturbing element to the movie, which is perhaps what the furious IMDB’ers mean. But in my opinion there’s enough blood, body parts, twisted toomfooley and horrified expressions to keep your inner horror freak happy.

I found Excision to be a very original and entertaining movie. And the final fifteen minutes are horrifying – you won’t forget that scene in a hurry. Parts of it actually freaked me out, in the way I wasn’t sure if I could watch the whole thing without a pillow.

And extra praise to the actresses too – Annalynne McCord (who I actually love) and Traci Lords (who my boyfriend actually loves) were both fucking great and without either of them, it wouldn’t have been so good.