Eden Lake is simply one of the best horror movies I’ve ever seen and that’s mainly down to how highly realistic and brutal it is. I felt literally shell shocked after I’d finished watching it the first time. Some moments of intense violence and characters you truly care about, this is a fantastic film not for the faint hearted.

A little like the real life Fred & Rose West case, this film is pretty sordid and certainly isn’t the best but it does have its moments and a pretty cool ending. And a very surreal ‘Christmas Day’ scene. And I met the main actor Perry Benson when I was at a comedy gig in London a few years ago!

Kill List is a very strange, ambiguous, violent and unsettling film. It’s hard to describe to be honest but the story follows a hitman down a rabbit hole of weirdness as he gets embroiled with a job that’s not his usual format. The violence in this film is so realistically shocking I guarantee you’ll be digging your nails into your hands. 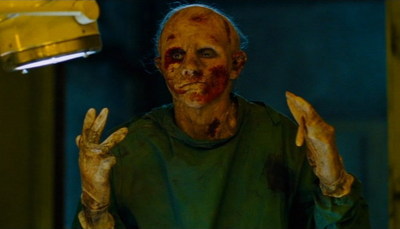 A lot of people slated his film but I actually enjoyed it and I’ve seen it more than once. It’s a pretty cool idea about being locked in the London underground overnight, trying to escape the clutches of a deranged, butchering weirdo. It’s not perfect but it’s a fun, British horror. Look out for the abortion scene!

Never seen someone force fed excrement through a tube until they explode? Then you need to see Inbred – a darkly comic but highly gory horror set in the deep north of England. Unfortunately, it could have been a bit better than it was, but it’s still fun with uniquely gross death scenes. A little reminiscent of The League of Gentlemen at times.

A lot of people talk about Neil Marshall’s The Descent but I prefer Dog Soldiers, which he made first. It’s a genuinely funny film in places with a great cast but when the violence does ensue, it’s pretty damn hot. Want to see someone’s intestines pulled out by a sheepdog? Then this is a film for you.

One of the more disturbing films on the list, this tells the story of a young man with paranoid schizophrenia and other severe mental problems who casually decides to stop taking his medication on the weekend he’s looking after his bed-bound mother. Yep.

Same director as the aforementioned Creep but this film shows a bigger budget and more humour. Some office workers sent on a team bonding weekend to Eastern Europe run into some serially pissed off and deranged killers. A great mix between The Office and The Hills Have Eyes.

Okay so the scriptwriter for Event Horizon is American. But the director and much of the cast are British so it’s kinda half and half and it’s gory as HELL (no puns intended) so I had to include it. Event Horizon is one of my favourite horror movies – it’s gross, scary and nightmarish. Just about sums me up really eh?