I thought it would be fun to look back on the highlights of my year in film.

Now I can be a bit of a tortoise when films come out. I’m slow to watch them basically and I dislike the cinema a lot of the time. And I have a tendency of watching movies no-one had heard of instead of the big blockbusters, so I will begin by listing the top three movies I’m very annoyed I missed –

The Babadook
Fury
Dawn of the Planet of the Apes

Three films I wish I’d made more time for. I was excited by the release of each one, then kind of, just….didn’t watch them. To be fair I was on holiday when The Babadook came out, but I have no excuses for the other two except pure bloody laziness. I’m expecting to unwrap Dawn of the Planet of the Apes on Blu-Ray over Christmas though. Yay!

But I do go to the cinema sometimes and the best movie I saw there this year was probably Lone Survivor starring Mark Wahlberg as a Navy SEAL in this based-on-a-true story movie. I like war films, particularly modern warfare and this was a slightly corny but brilliant tale of fighting against the odds, comradeship, brotherhood and integrity. It was a bit ‘American’ towards the end with a bizarre cover of David Bowie’s Heroes but I did love the movie. 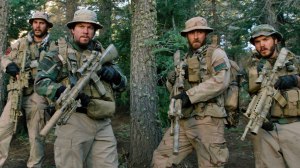 And guess what else I saw and enjoyed? Godzilla! Except for the waaaay too early exit of Walter White of course. I thought it was a great homage to the old original movies, it had a very old school feel and because I kind of expected to be bored and dislike it – as Yazz once sung…..The Only Way Is Up! And the only was up. Unexpected enjoyment.

I watch more movies on DVD than in the cinema and to be honest I don’t even enjoy going to the cinema an awful lot. I’m a terrible fidget and sometimes I want to smoke or talk about the movie to someone. The adverts get on my nerves and so does anyone who dare whisper, laugh, cough or eat nachos.

So I probably had slight more success with films I watched at home.

Harry Potter and the Philosopher’s Stone (2001) – of course

Excision (2012) – a really fun horror film that I reviewed here

Princess Mononoke (1997) – me and my boyfriend watch an average of two new Studio Ghibli films a year, this was one for 2014 and it was so excellent

X-Men: Days Of Future Past (2014) – not quite as good as First Class but still excellent

Paper Moon (1973) – set during the Great Depression this is a funny and heart warming tale starring Ryan O’Neal and his real life daughter.

The Wolf of Wall Street (2013) – I put this off for a while because it’s so bloody long but guess what? I loved it. Loved it!

Starred Up (2013) – slightly disappointed but this but Jack O’Connor was electrifying.

And though I didn’t enjoy the film that much I did love this one particular scene from Bad Neighbours – the Robert De Niro Party – it was just pure psycho madness and I had to mention it. You can read my full (slightly disappointed) review here.

And it was a bad year for celebrities / actors (whatever you want to call them) being hacked. Is there anyone in the world who hasn’t now seen Jennifer Lawrence’s boobs? I know I have. And I bet Bradley Cooper has.

And recently we had about all the Sony leaks which I won’t say too much about in case I piss off North Korea and they want to eat me. But I must say I did enjoy reading what the ‘executives’ said about Michael Fassbender and I’m sure he wasn’t too worried.

Imagine the scene, Michael is talking to his friends and family, scratching his head, slightly worried about this whole hacking scandal, I mean, what might the Sony emails say about him?! Oh haven’t you heard Fassy? Haven’t you heard what they said?

‘He just makes you feel bad to have normal-sized genitalia’

And after such GREAT news about Fassy’s big willy, lets get on to the slightly more disappointing 2014 movies. Sad face.

300: Rise of an Empire
The Inbetweeners 2
The Quiet Ones
Sin City: a Dame to Kill For

And to cheer us up now, here are some of my Most Anticipated 2015 movies

Have a lovely Christmas everyone!

Films, books, soundtracks, good humour
View all posts by emmakwall →
This entry was posted in Random Writing and tagged 2014 films. Bookmark the permalink.