Dark Skies is a horror / sci-fi movie directed by Scott Stewart. It stars Keri Russell, Dakota Goyo, Kadan Rocket (interesting names here) and Josh Hamilton as a family who are targeted by a mysterious, dark force seemingly drawn to their suburban home. 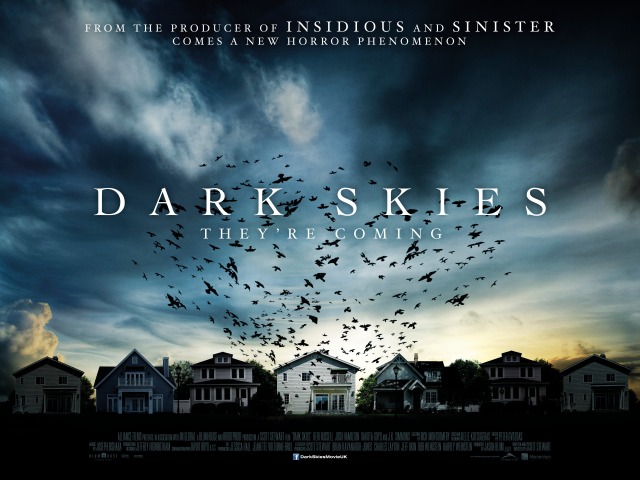 I watched this on Netflix last night with my brother, he had seen it before and I worked out the twist ending before the end – much to his amazement and adoration (sorry Harry but you were impressed).

And whilst yes, this film does have much predictability (please see check list below) it was still pretty good and creepy. I’ve seen so many ‘atmospheric’ spooky movies recently where nothing really happens until the last 15 minutes so I was pleasantly surprised to find jumps and scares aplenty, right from the beginning.

But yeah, I did make a bit of a check list of ‘familiar’ scenes…..

So in many ways this was a standard things that go bump in the night movie with weird occurrences building up to scarier and harder-to-explain situations. But I did enjoy it – and I did jump once or twice too.

Dark Skies reminded me a little of Poltergeist and a little of Signs. It’s one of the creepier alien movies I’ve seen and had a supernatural edge more reminiscent in ghost movies. Though it did have the odd cliché or twelve, all the scary scenes were executed well and there was plenty going on to keep me entertained.

Right from the start there were some pretty good visual scares which I wasn’t expecting. I was happy about this as I hate it when nothing happens for ages (Paranormal Activity).

The soundtrack wasn’t particularly memorable but sound effects were used well, with buzzing and high pitched sounds used for ‘sci-fi’ effect. It was uncomfortable listening to it in places, adding to the tension and felt evocative of older science fiction movies.

My favourite line from the movie came from actor J.K. Simmons who played The Expert. He used a really cool analogy when asked by the frantic mother why her family were being targeted by scary extra-terrestrials. His response – “Does the lab rat understand why the scientist puts a probe in his head and gives him brain cancer?”- was pretty cool I thought.

All in all this is no masterpiece but certainly a fun watch. An enjoyable film which is riddled with cliché moments but also has plenty of scares and intrigue. Performances were good, plot was coherent and as I’m a fan of scary movies, I enjoyed it. The only thing I didn’t like too much was the ending, but that’s mainly because it made me feel a bit sad.

Time for some Creepy Pasta:

I saw an alien when I was younger. Well I say ‘saw’ I’m quite capable of believing I didn’t see it, buuuuuut who knows. I still remember it to this day. I saw it out of my bedroom window which was on the ground floor. It was late at night, dark and the alien was staring in the room at me with a very grumpy expression. I stared for a while, then turned on the light and he/she vanished.

Here is a drawing of the alien as I remember it to be. Yes I’m no artist but I really remember its eyes and mouth facing downwards, giving an angry and moody appearance. He was grey / silver in colour and very thin.