I’m pretty lazy. I mean I go to work and get my housework done and do the normal things in life we’re generally expected to do (sigh) but in my spare time what do I enjoy? Well ideally – laying on my sofa and watching quiz shows all day.

So let’s rejoice the idle and celebrate the lazy (but only if we can be bothered of course).

1. The Dude – The Big Lebowski (1998)
An obvious choice but too good not to mention. The Dude is so lazy he goes to the supermarket in his dressing gown. His finest moment has got to be this amazing comeback, having been verbally attacked about his life by the other Lebowski, Mr Lebowski – “yeah well…that’s just like…your…opinion man”.

2. Floyd – True Romance (1993)
Brad Pitt wasn’t in True Romance for long but certainly made an impression as the vacant stoner Floyd. We don’t see him in any scene where he isn’t on the sofa (genuinely) and given the admissions Brad has made about his ‘younger years’ I’d think Floyd isn’t that far from the real man himself – which only makes me love him more!

3. Sloth Victim – Seven (1995)
So gross. So horrid. So rancid! Love it. Rather an important message here perhaps about not being TOO lazy? Mind you it’s a really good excuse not to do a lot isn’t it?
“Dinner tonight with the in-laws. Umm. Well I’d love to but I’m tied to a bed and I’ve chewed my tongue off so…?”

4. Mort – Secret Window (2004)
Another character who spends the vast majority of his time in a dressing gown. And napping. Oh for the love of god how much Mort naps. In fact when Mort isn’t starring in a horror movie he’s on the sofa napping (or eating crisps and then napping).

5. Jabba the Hutt, whatever Star Wars film/s he was in
Quite a contrast between him and some of the others eh? I mean, yeah SURE Brad Pitt and Johnny Depp are playing ‘lazy guys’ but have you seen the former’s arms? He didn’t get those from lifting a packed out bong and I know who you’d rather find sprawled on your sofa after a hard day at the swamp.

6. Ed, Shaun of the Dead (2004)
Ed’s so lazy the ONLY reason he was able to fight against zombies was because of his practice shooting them in video games ALL DAY LONG. He’s unemployed, he smokes weed, he stays home all day and can’t even take a message properly.
You can’t help but like this guy though. 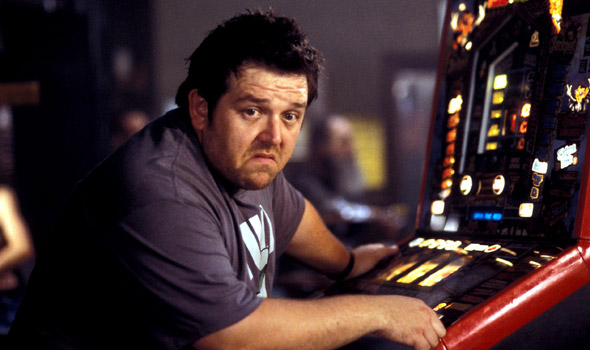 7. Homer Simpson, The Simpsons Movie (2007)
I’m glad The Simpsons released a movie and I was legitimately able to put Homer on the list. Plus the whole concept of the movie is pretty much summarized by Homer’s awfully lazy ways – I mean if he hadn’t dumped Spiderpig’s waste into the lake rather than dispose of it properly, well, none of the movie would have happened.

8. Fat Bastard, Austin Powers & the Spy Who Shagged Me (1999)
To be honest, I don’t have a massive issue with Fat Bastard – except all the ‘this coffee tastes like shit’ stuff – that is nasty. But he’s pretty happy, he marches to his own bagpipe and I’d never dare claim that eating fried chicken in bed is a bad thing exactly. I mean, how could I slate something I can’t definitely confirm I myself haven’t perhaps truthfully done? Hmmm.

9. Melanie, Jackie Brown (1996)
Best summed up by this snippet of dialogue that takes place between her (Bridget Fonda) and Ordell (Samuel L Jackson) about smoking weed –

Ordell – “You know you smoke too much of that shit, that shit gonna rob you of your own ambition.”

Melanie – “Not if your ambition is to get high and watch TV.”

10. Bill and Ted – Bill & Ted’s Excellent Adventure (1989)
I mean in the grand scheme of ‘laaaaazy’ these guys weren’t too bad. They go off round the realms of time just to fulfil a history report for god’s sake, though I guess if they hadn’t been such ardent slackers in the first place none of that would ever have happened. Plus there’s just so many ‘classic lazy’ references – the threat of military school, smoking weed, playing in a band and saying WOAH.