“At sea one day, you’ll smell land where there’ll be no land, and on that day Ahab will go to his grave, but he’ll rise again within the hour. He will rise and beckon. Then all – all save one shall follow…”

Moby Dick is an adventure movie starring Gregory Peck and Richard Basehart. The story is of course based on the famous 1851 novel ‘Moby Dick / The Whale’ by Herman Melville.

The story follows narrator Ishmael (Basehart) as he joins up with whaler ship ‘The Pequod’, led by Captain Ahab (Peck). Despite a frightening premonition about the fate of the ship and dark rumours about the stern Captain Ahab, Ishmael and the rest of the crew set sail.

This proves to be a mistake of epic proportions but alas, who was to know that Captain Ahab was such a psychopathic, mad bastard (and kind of sexy, but that might just be me!).

We subsequently learn how Captain Ahab is consumed with the need to find MOBY DICK – a huge white whale, bigger than any other known to man. Ahab had been left crippled and scarred by a previous meeting with Moby Dick and though he (obviously) survived the attack he did lose a leg, some facial tissue and a lot of marbles.

Though permanently injured from the white whale, Ahab is undoubtedly an impressing and imposing presence. He rarely shows himself on deck in daylight, preferring to frequent the wooden boards at night whilst looking out over the water for a sign of Moby Dick. Having lost his leg to the beast, he uses a whale bone as a prosthetic and it thumps on the ship floor eerily while the crew in the cabins below listen to him, talking amongst themselves about his madness. 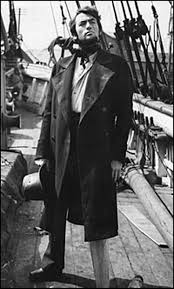 Moby Dick is such an atmospheric film, it really impressed me. Such an intense ending!

I’ve read that the book explores many themes between different characters and situations but in this film it is Ahab who sticks in my mind more than anything else. His need for finding Moby Dick has quite obviously sent him mad, but it is like a virus, a virus that he is able to pass down to his crew, lathering them up into a frenzied spirit, making their lust for Moby Dick the same as his own. All except for our narrator Ishmael – who sees things for what they are.

The last scenes in the movie where Ahab inevitably meets with Moby Dick are frightening, exciting and insane – all at the same time.