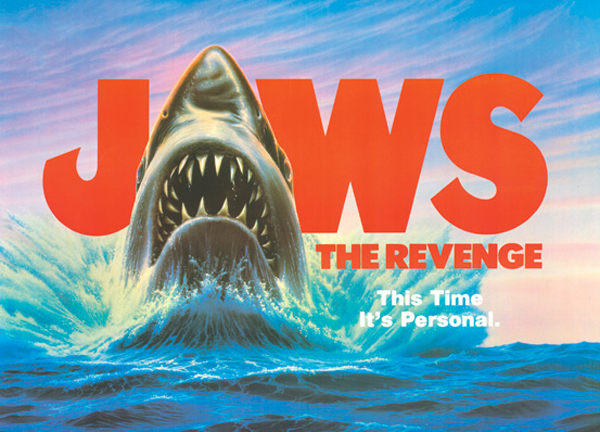 (alternative ALTERNATIVE tagline – “I have never seen it [Jaws: The Revenge], but by all accounts it is terrible. However, I have seen the house that it built, and it is terrific.” –
Michael Caine

Thanks so much to Gill for allowing to have me in this great blogathon celebrating the super Michael Caine. I literally knew STRAIGHT AWAY which film I wanted to review and not only am I thinking this is going to be a great pleasure to write, but it was truthfully  also a big pleasure to watch (again – for the first time properly since I was young).

There will be some spoilers but is anyone really bothered?

Though JTR (as I shall be calling it from now on) is technically, the fourth Jaws movie, it actually picks up after the sequel Jaws 2 (1978) with its true story line completely ignoring the hilarious Jaws 3-D (1983) with its totally hilarious special effects. Thank god. Because if you think JTR is really, really, SUPER bad then you haven’t seen Jaws 3-D. Maybe that’s why I’m so forgiving.

It’s also important to note that very excitingly, VERY excitingly (for reasons unknown to anyone but me and maybe not even me) JTR is – among many, many not necessarily great things – also a…………Christmas movie. Well it’s set in the season and you see a tree covered in baubles so it counts for me. Go amend your Favourite Christmas Films lists NOW!

Because you know what? I did enjoy watching Jaws: The Revenge and – for whatever reason – I know I’ll want to watch it again and not just because of the super Michael Caine who’s character was actually rather likable and of course played in that way that only Michael Caine can play it (which is just like Michael Caine).

He plays a fairly free spirited beach loving guy (look I forgot exactly what he does, maybe hires out boats, or something else that allows him to walk around looking chilled out, sun kissed and casual. Baaaasically the film is set in the Bahamas and the family go there for the holiday season, Lorraine Gary ends up flirting with him and he gets embroiled into the story line). Ohhhhhh, that’s right. He’s a pilot. He flies a little plane around the island.

But in 1987 the Brody’s are the wrong family to be hanging around with because JTR does exactly what it says on the tin and we – the supposedly naive (or full frontally lobotomized) yet strangely happy viewers – are expected to believe that a shark, a big FISH, is actually out for vengeance on the Brody family. And you wouldn’t believe (if you’ve not seen it) just how even worse that is in real life than it sounds. In a way I couldn’t get over it, I just kept thinking about it. Say what? We’re supposed to believe that a shark is actually chasing specific people and following them to Bahamas (he swam over 3000 miles in a day!) with the idea of picking them off one by one like he’s Michael fucking Myers. SAY WHAT? Oh yeah and it shares telepathic dreams with Lorraine Gary too. Yep. Really. All true.

There’s other minor hilarities too, commonplace in such low rent movies – silly acting, bad accents (Mario Van Peebles) and stupid effects. But nothing. NOTHING compares to the best scene in the movie where Jaws stands up on his tail and roars. I’m not sure it needs much more explanation than that, but I will just tell you that the sound guy on set refused to create the noise, saying it was impossible and of course – sharks can’t roar. So the sound we so gleefully hear is actually an effect taken from an old Tom & Jerry cartoon from 1948.

Then the shark blows up with some very hokey and implausible justifications as to just HOW and WHY he got blown up. Oh the reasons are there. I’m just not sure I trust them. But the whole affair is all very enjoyable anyway. And as far as shit movies go this is definitely one of the better ones.

39 Responses to Jaws: The Revenge (1987) – The Marvellous Michael Caine Blogathon