Films I Watched In: October & November

Once again I’m behind and having to amalgamate two (rightfully singular) posts into one. But you know me by now, so I feel I don’t have to explain too much. The Chase etc.

All re-watches except Intruders and Friday the 13th Part VIII. Or simply “Part 8” to those of you who can’t be bothered to work out the numerals (don’t be offended, I was putting myself in your shoes).

The three ‘non-horrors’ I watched were all re-watches too – Back to the Future (1985), Con Air (1997) and David Brent: Life on the Road (2016). I think I’ve mentioned my adoration for all of these movies before, but if you’re interested you can click the titles for the respective plot hole, Top 10 and traditional movie review.

So Intruders was the classic “fuck it, it’s on Amazon Prime and I’ve got nothing to lose / nothing else to do” viewing experience. The rather generic plot about a shadowy creature haunting kids bedrooms was neither remarkable nor particularly scary but it did showcase one memorable scene that I found both bizarre and funny.

So this little girl wakes up in the middle of the night having had a nightmare (or was it?) and goes to her dad (Clive Owen) for comfort and reassurance. But rather than doing any of the normal things you’d associate with a situation such as this – ie. a hug, a cheerful story, a ‘monsters don’t exist’ speech or even sleeping in mum and dad’s bed if you’re really lucky, the girl’s father (let’s just call him Clive Owen because it’s easier) acts in a way that can only be described as funny, weird and a bit deranged and scary.

He takes his daughter into the garden (it’s the MIDDLE OF THE NIGHT) and – using scrap materials gathered from his creepy, spider-ridden shed – proceeds to build a life size figurine of the entity his daughter is so afraid of. It’s like a big, creepy scarecrow basically. Clive Owen then encourages his young daughter to spray petrol / lighter fluid / kerosene / some highly flammable liquid she probably shouldn’t be using, all over the effigy whilst he laughs crazily and wildly. He then sets fire to it. 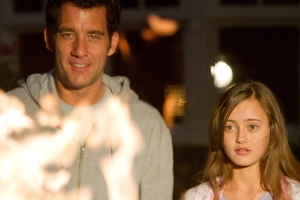 Friday the 13th Part 8 I watched with my (new-ish) boyfriend because he’s been making his way through the entire Friday the 13th franchise (he’s DEFINITELY a keeper) and it was fun to watch one together. We watched Halloween (1978) in the same night. Swoon! And though there is a serious lack of Manhattan in Friday the 13th JASON TAKES MANHATTAN, it was still fun (if you like that kind of thing, which I do).

The Spanish horror The Orphanage (El Orfanato) was part of the “Emma Tests Herself” series, where I basically watch a  very scary film home alone to see if I can ‘handle’ it. I handled it just fine and I still think it’s above average, I’d recommend to any horror fan. And talking of horror fans, I know EVERYONE hates the A Nightmare on Elm Street remake, but actually as a one off horror, I don’t mind it too much. It’s entertaining isn’t it? The Village of the Damned is basically John Carpenter at his absolute worst, but I will always have a little soft spot for this crap movie because it’s a fond (kind of) memory as one of the scariest films I watched as a kid. That. The Entity (1982). And Friday the 13th (1980). Happy memories and sleepless nights.

And time to leave October with this absolute CLASSIC death scene from Hatchet. Not for the faint hearted or fans of Forrest Gump. Yummy!

I actually went to the cinema twice in November. You can blame my cavalier behaviour on Meerkat Movies where getting 2 for 1 tickets allows you to overspend on pick & mix and save nothing, in fact if anything, spend more. The first film I watched was Thor: Ragnarok (2017) which I LOVED (read my review here) and the second was Jigsaw (2017) which I had mixed feelings about. 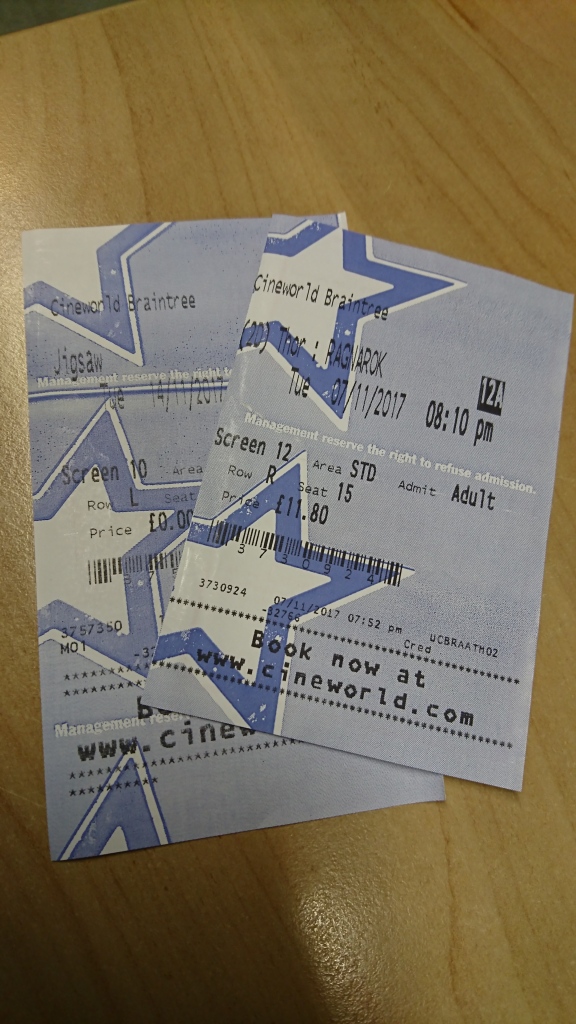 The Saw films are the only big franchise where I’ve seen EVERY film in the cinema so I have to keep going and complete the set. I had mixed feelings about this long awaited (kind of) addition because I actually quite liked the storyline (which lived up to the outlandish and confusing Saw plot just as good as the rest), I was disappointed however, with the lack of gore. Silly old me assumed that it would be like Die Hard 3 and come back with a vengeance but the traps were really meager and I’m not sure the blood loss would even have filled one of those kilner jars that everyone loves now. Boo.

Other notable facts – I spent over ten English pounds on pick & mix which made me feel sick (the price not the sweets) AND I saw a guy who had sneaked in his own food, including two family sized packets of crisps and a TWO LITRE bottle of Pepsi Max. Stylish.

Face Off (1996) – read my glowing and slightly nutty review here.

From Dusk till Dawn (1996) – my favourite film since I was thirteen years old.

And QT overload with Inglourious Basterds (2009) and Django Unchained (2012) which are my most and least favourite films of his ‘after Jackie Brown’ days.

Stay tuned for my December quota, plus a look at everything I watched in 2017!

15 Responses to Films I Watched In: October & November