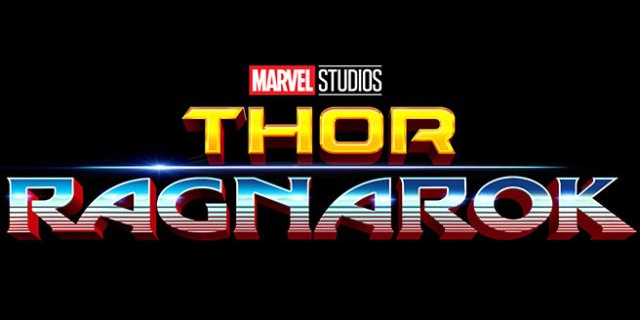 Well if you can’t be bothered to read more than the first paragraph (which is completely understandable and perhaps preferable) let me just tell you that I really enjoyed this movie. And that’s coming from someone who isn’t into Marvel, but is definitely into films and 2 for 1 cinema tickets on a Tuesday night and bags of overpriced Revels that seem to have a prejudiced Malteaser to toffee ratio and also because it seemed unfair to put a new boyfriend (that’s right, subtle klaxon – I have a new boyfriend) through what I actually wanted to see which was *cough* Jigsaw.

But in hindsight I’m so glad I didn’t see Jigsaw (though I’d still like to see Jigsaw) and I’m so glad New Boyfriend wanted to see Thor: Ragnarok because HELL YEAH it was fun.

Now it’s important to note I’m not a Marvel Nerd – not because of street cred (entirely) but more because I don’t know or understand the innermost complex workings of the story and links to other films. So I can’t comment on that too much (I didn’t even know about the extra scenes in the credits – sacrilege). I’ve not watched Thor: The Dark World (2013) and the first one is just a hazy memory to be honest (watched back in the golden days of Lovefilm before Amazon bought them out). But anyway, what I can say is I thought it was really funny and super entertaining with terrific characters, fun action scenes and some banging music too.

Seeing Thor kick arse to Led Zeppelin’s Immigrant Song was very exciting and you know what, I didn’t think about the time once (with a duration of 130 minutes there’s definitely some potential for pins and needles and aimless shuffling).

Apart from Chris Hemsworth’s sexy voice, handsome dreamy looks and rocking body (I had to say it at least once), the best thing about the film – for me – was the characters and their subsequent dialogue and humour. It’s unsurprising when noting that Taika Waititi directed it – he’s a New Zealand film guy with links to above average comedies (What We Do in the Shadows (2013) being one of them!). His presence explains the self-deprecating, awkward and dry humour that is prevalent throughout (and it also kinda explains the funny man made of rocks with a distinct Kiwi accent). Fun fact – he had it written into Hemsworth’s contract that he must have a shirtless scene. Thank you Taika. 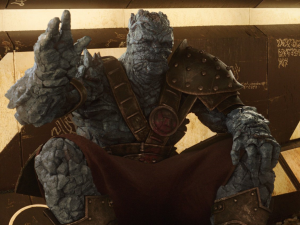 But anyway I digress. On with the review.  I was initially most excited to see Jeff Goldblum as the Grandmaster (obviously – I mean as the Law of the Universe states, putting Jeff Goldblum in any movie instantly makes that movie better) but I must say Chris Hemsworth was fantastic and not just because of his sexy voice, handsome dreamy looks and rocking body. He was also reeeeally funny and it struck me what great comic timing he had and how well he played out his numerous, humorous scenes. He’d be superb in a classic comedy film – or maybe he’s already been in one? Who knows. I have my finger so far away from the button I can’t even be sure a button exists. I am pretty sure he was in Neighbours though? Never seen him on The Chase. 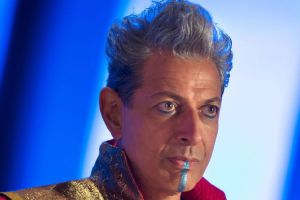 But Jeff Goldblum was still an absolute delight and hard to top. Man I love Jeff Goldblum but to be fair the entire cast were brilliant (and very Brit heavy – yay), though – and no offence – I still don’t get the Benedict Cumberbatch and Tom Hiddleston ‘so gorgeous’ thing. But this is supposed to be a film review, not a shallow evaluation of actors and their looks (damn it) so I should just be quiet. I guess I do kind of get the Hiddleston one, when he’s not dressed as Loki. Or when he’s not dressed at all, like in High Rise. Anyway, shut up Emma.

I need to get back on track (again). So apart from the above (excluding my many, ridiculous comments) another reason I really liked Thor: Ragnarok, is because it was set in a different universe / dimension / realm / place other than boring earth and the nerd that has always lived inside me enjoyed that a lot. Plus it didn’t linger to long in any one place (both figuratively and literally), it jumped around and I enjoyed that too. With a long duration (and 130 minutes IS a long duration) you need to switch it up a bit.

And so, 750 words into this ‘review’ and what have we learned. Not much really. Except Tom Hiddleston looked good in High Rise and Jeff Goldblum is a legend. But what’s the story, the narrative? Well there’s the Goddess of Death (played by a dark and sultry Cate Blanchett) who is kind of evil. And there’s a big firey demon thing who I think was Ragnarok (I’m only kidding, I know it was him) and you know, like epic battles and weird planets and spaceships and zany outfits and stuff. Basically a no hold bars, adrenaline fuelled thrill ride (I love saying that) with the added bonus of Jeff Goldblum.

But it was the humour and script that really stood out for me. And Jeff Goldblum.