“A new generation of terror…”

I had wanted to watch this film for sooooo long. As some of my regular readers (I know there’s at least two of you, don’t be shy) will know, I absolutely mother-fucking love The Fly (1986) and it is definitely my favourite EVER horror movie as well as holding a firm place in my top 10 of all time. Well in 2019 I finally watched the sequel – thirty years after its original release. Gulp.

I’d always heard it was pretty decent and of course I knew all about ‘THE’ dog scene (sob!) but bugger me it was even better than I thought it would be. Genuinely a great sequel and certainly a good  horror film in its own god damn right. You’re gonna have to forgive some of the swearing you’ll find here today by the way. Not only is it a product of my excitement but I’m also writing this after two glasses of wine and a particularly exhilarating episode of The Chase Celebrity Special. Hysteria levels are high.

So basically even though Geena Davis didn’t have a maggot baby (thank god), she DID have a baby. And that baby is Eric Stoltz – who is kind of quarter fly, because his dad was half fly and his mum was…..well she was just Geena Davis. Being that Eric is quarter fly means that he looks normal and acts normal (ish) but as we all learn, he’s heading towards a pretty grim fate.

We’re given a small inkling into his ‘you’ll never be normal DNA’ during the opening birth scene (pretty gross) where it shows him being born as some sort of a bug chrysalis before it’s cut open to reveal a human baby inside. 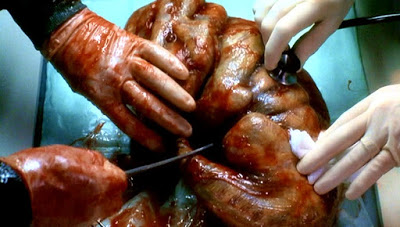 As we watch him grow up he’s actually pretty likable. The poor little chap has spent his entire fast moving life living inside a science lab and can he really trust those scientists? Hint – he definitely can’t – and they could be a little more sympathetic when administering his ‘Anti Fly’ meds seeing as he’s only a kid. Fucking bastards. Anyway. I say ‘fast moving life’ by the way because he looks about thirty when he celebrates his fifth birthday. And no Oil of Olay cream on earth is going to reverse that aging.

All part of his fly DNA of course – as well as his stupidly high brain power – and not forgetting the whole sad debacle about how one day he will fully turn into a massive, gross monster that no-one wants to have sex with.

A fact made all the sadder because, like I said, he’s pretty likeable. You can’t help but feel for him (and get involved in the emosh side of the story) given his rather crap hand in life. Honestly I actually cried a couple of times (and not just at ‘THE’ dog scene).

So anyway. All in all I thought the movie was grand. I really enjoyed it. It was gory – definitely gorier than I expected – with plenty of pus and slime and ‘sod it we can use our imaginations because none of this is possible anyway’. I definitely winced a fair few times.

I liked the science lab setting, where almost the entire film was set. As well as being atmospheric and dark (thunderclaps and lightening sort of thing) it also went well with the retro feel of the movie which at times did feel a bit like some old science fiction flick OR a particularly excellent Made For TV Movie (if you, like me, see why that would be excellent – who doesn’t love Made For TV?).

The soundtrack is worth a mention too. It wasn’t Howard Shore who composed it this time but still an accomplished composer and horror film regular – Christopher Young. Pretty nifty for a sequel. You can buy both soundtracks now together, in one re-mastered collection.

I was just impressed with the whole thing basically. Maybe I expected less but I dunno, I HAD always heard it was fairly good and I like horror and I especially like retro horror so I can’t really blame any usual ‘low expectations’.

I guess it was mainly a combination of the story and the main character. Perhaps I never expected to CARE about Eric Stoltz as much and so when the proverbial shit hit the proverbial fan – as well as being grossed out by pus and slime and blood and exposed bones and heads being crushed under elevators – it did also help that I was rooting for him completely.

Oh and if you needed one more reason to watch this, three words baby –

STATH IS BACK. And just as smug as he ever was. Yay!

Okay maybe a little more dishevelled (give him a break he’s only got one hand remember). But definitely still a huge, smug smart arse. YAY.