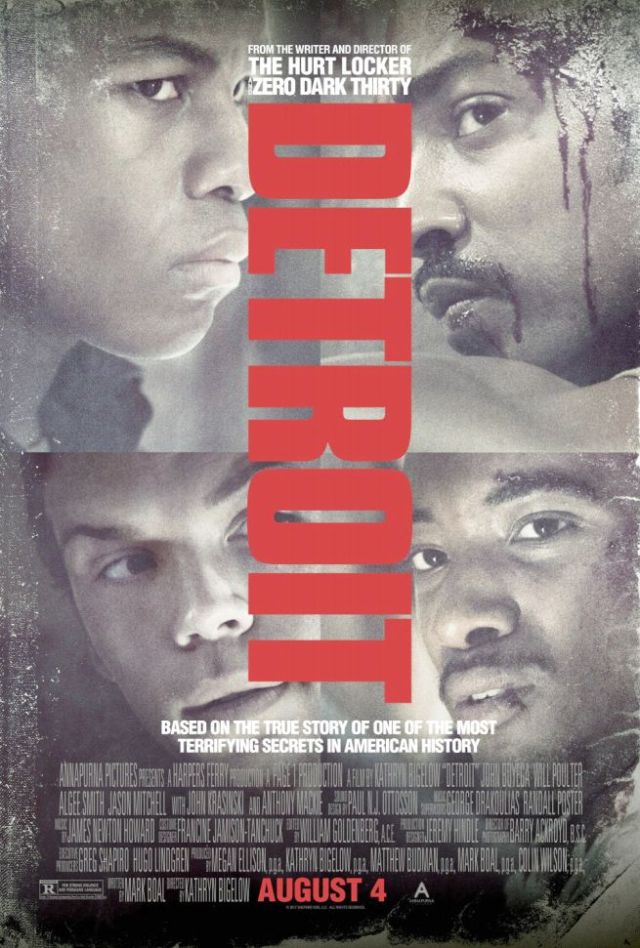 Just wanted to quickly tell you that Detroit is available now to view free on Prime. I implore you to watch it – I implore you! I mean apart from being really good, it’s rare that Prime actually have a decent listing going on, that isn’t a cut price Liam Neeson ‘classic’, something generic with skinny teens and a Ouija board (again?) or a film that was released over a trillion years ago. I mean bloody hell Amazon, don’t you think I own that on DVD already? Oh, but you suddenly wanna charge me £3.95 for Trainspotting that’s over 20 years old just because the sequel came out last year. Yeah THANKS you bastards. I can count on one hand the amount of films I’ve been excited to see on Prime – Detroit, Goodnight Mommy and The Green Inferno (which you now have to pay for).

ANYWAY. Back to my Detroit review, which I thought was fantastic, easily one of the best films I’ve seen in a while – and definitely the best Kathryn Bigelow film I’ve EVER seen. Though I do include Near Dark in that so, er, yeah….. no further comment (sorry Bill Paxton, wherever you are, still love YOU of course).

Detroit was released last year (though I hadn’t heard of it until my first watch – with my finger on the button as usual!). It tells the story of a horrific, true event that occurred one night in the midst of the 1967 Detroit Riots.

I don’t have to say TOO much about the plot or incident in question and hopefully what I DO say won’t come across as cliché or obvious or ‘the right thing to say’ – but baaaaasically innocent black kids and aggressive, white police officers make up a lot of the main cast. And things do get pretty ugly. It can be hard to watch in places, but – without sounding weird – it’s also completely captivating.

It does have a fairly long duration, just under two and a half hours but in fairness you don’t notice it a lot. Happily it’s one of those movies where the second half is on a par with the first half (if not better than), which I feel is SO important with these longer, more serious films. We all know that disappointed feeling when potentially great movies begin to tail off, aside from being boring it also makes them a lot less memorable. Well if anything, Detroit was more of a slow starter, but the tone and characters are set up well and there’s a lot of cool, Motown music to enjoy (anyone know The Dramatics?) too.

The main thing that struck me though – apart from the powerful story itself – was the acting. The two main actors are Will Poulter (who I last saw in The Maze Runner and literally thought was still 15 years old) and John Boyega (who I’ve been a fan of since Attack the Block though he really needs to update his IMDB picture). The lads are 25 and 26 respectively, okay, not kids exactly but I kind of – in a non-patronising way (hopefully) – did think of them as kids. But EPIC KIDS. Kids who absolutely fucking carried this movie and helped make it what it was. Superb acting, utterly believable, perfect (to my ears) American accents. They played their roles wonderfully and it made me feel kinda proud of these young, British actors. They did a really great job and for me, made this movie just that extra bit special.

I know this hasn’t been that ‘informative’ as a review (except for all the stuff about Amazon Prime of course), but what else can I say? I don’t want to give anything away. But it’s enthralling, well made, well acted, well shot. And it feels relevant and important. If you’re in the mood to watch something you can really get into, immerse yourself in the plot, then this is definitely one to consider.