Yeah I was going to write ‘mofos’ but that’s not really me. So we’ll start by looking at Films I Watched In December (12 in total) and then the exciting GRAND TALLY of the year (it’s kind of like the Oscars but with loads of low rent horror films and all the dresses bought from Primark).

So being December and the C-word (no not that one you naughty hedgehog), I did of course watch a few Christmas movies:

Home Alone (1990) – I watched this twice within a week AND got ‘keep the change ya filthy animal’ awesome PJs from my best mate Chloe for Christmas. Actually, I find Kevin kind of creepy on these pyjamas. Look as it his eyes. It might just be me, but I find them way too demonic looking.

Home Alone 2: Lost in New York (1992) – the obvious solution when post-Home Alone depression kicks in. And though I’ll always prefer the original, I still think this is about as solid as sequels get and the inclusion of Tim Curry (“smooching with everyone!”) is AB-SOL-U-TELY super great. The traps are less cartoony and more murderous though, which makes it seem (even more) dumb, but also pretty funny. And the Pigeon Lady is no Old Man Marley.

Elf (2003) – my least favourite Christmas film I’ve ever seen EVER and I’m including the one with Vince Vaughn.

I also watched Bruno (2009) and Groundhog Day (1993) on New Year’s Eve (yes I had a rocking New Year’s Eve thank you very much), both re-watches, both very enjoyable. Particularly Groundhog Day which I hadn’t seen in years and really made me laugh. God I love late 80s / early 90s Bill Murray when he was so god darn perfect at playing someone smug and arrogant.

In-between Christmas and New Year I also watched: The Evil Dead (remake – 2013), Frailty (2001), The Guest (2014), The Business (2005) and Law Abiding Citizen (2009) –  all re-watches. In fact thinking about it I didn’t watch one movie during December that I hadn’t seen before. Shame on me. Though I’m the same with books too, in passing. I have so many new books to read, but more often than not I’d rather just read an Old Favourite.

Obviously I love The Guest (old news – click literally anywhere on my blog to find some deranged rant about it, but I must also say how much I particularly like Frailty and Law Abiding Citizen too. And would highly recommend both of them. And not just for hammy, shirtless scenes like the one below. 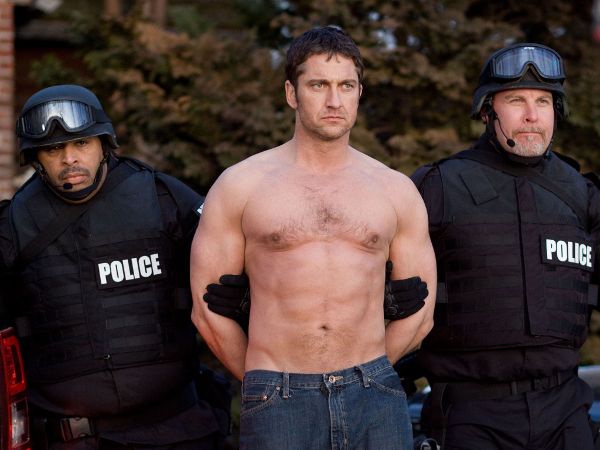 Law Abiding Citizen is one of those rare, modern action movies that is actually really good (though ridiculous in places and pretty gory too – surprisingly it’s actually rated 18 in the UK). And Gerard Butler breaks the mould slightly, playing a likeable and quiet bloke, rather than The Outlandish Lad (I’M A LAD!) he usually plays.

And Frailty, directed by the late Bill Paxton, is a really fab creepy thriller held in high regard by Stephen King and James Cameron – and like, who can argue with them? The story centres around a dad (Paxton) and his two kids killing demons hidden in human form and it’s a LOT better than it sounds.  It’s a little “made for TV” in places and the ending is likely to divide opinion, but for an overall great ATMOSPHERE and classic, dark-rainy-night mystery, the film definitely delivers.

So I know I’ve rushed through December pretty quickly but obviously everyone is MAINLY excited to see the yearly totals. So have a look at my extremely simplistic table to see the results for each month of 2017 and…..indeed…..the year.

Hope you enjoyed! And please stay tuned this year for more of my Films I Watched In series, maybe I actually can top a hundred?

Oh, and if you like Jeff Goldblum (and who the fuck doesn’t) check out my twitter page on a Friday. We’re going to break the internet!