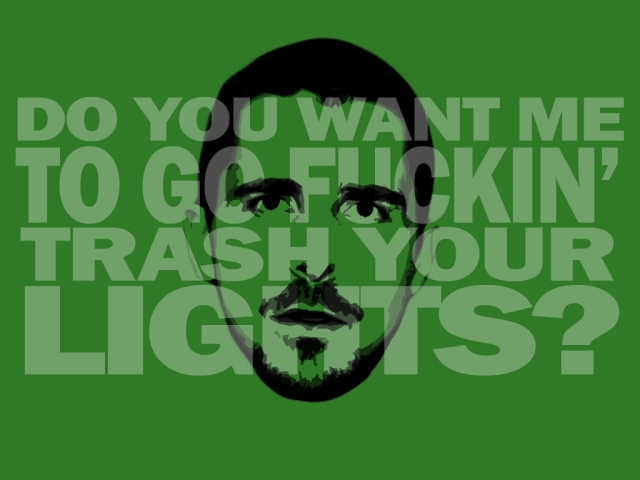 Big thanks to the brilliant Jake of That Other Critic for joining me in a fun conversation about the merits of Christian Bale’s outlandish rant on the set of ‘Terminator: Salvation’ (2009).

Jake and I both unashamedly love The Rant (we’ve bonded over it now for almost a year) and we both believe it’s actually better than the movie Bale was filming at the time. Not that that should be particularly hard, because as Jake says –

“Imagine a Terminator film, without time travel, without Sarah Connor, without even a Terminator as the main antagonist, and you have Terminator: Salvation – basically the world’s blandest sci-fi/action film ever made.”

So have a listen, have a read, don’t take this too seriously and just remember how fantastically shocking The Rant was.

(this video has additional subtitles so you don’t miss anything)

Emma: So Jake, do you remember when you first heard this crazy rant?

Jake: I’m not sure precisely when I first heard this insanity, but it’s just so prevalent, Family Guy’s done a parody of it! Of course, it wasn’t funny, because it was a Seth Macfarlane show, but Bale’s insane series of physical threats still manage to be hilarious, no matter the setting. I seem to recall there being a huge blowup when this tape was leaked, everyone freaked out, and Bale apologized publicly.

Emma: I imagine there was a huge blowup! Though when I listen to it on YouTube to cheer me up I still notice so many comments, presumably from fans of Bale, justifying his behaviour as a ‘serious actor’. Pur-lease. As if! What gets me is the DURATION. Everyone loses their temper from time-to-time but his fit goes on for four minutes! Definitely enough time for most normal people to realise they’re making a complete tit of themselves. Jake: Even more insanely, it just keeps on escalating! The whole “serious actor” argument doesn’t really apply here, Bale’s playing the most thinly-written incarnation of John Connor, a character-less character! He’s in Terminator: Salvation, doing the Batman voice, and generally putting in a half-assed performance. I’d call the rant a better performance, because he plays a more believable prick than the savior of humanity. It’s almost as if he sort of realizes his error and gives a halfhearted apology at the end with his “you’re a nice guy” bit, but seriously, too little too late, man.

Emma: That’s so true! I smile at that “you’re a nice guy” bit as well. Not because of Bale’s charitable, kind attitude – more because I imagine he looks round the room at that moment, sees the array of horrified expressions and finally realises the magnitude of what he’s done. Do you think maybe it was inevitable he’d end up giving a half-arsed performance in the film? Like he used up all his energy ranting to the lights guy? Do you think if we watched it really, really slowly we’d be able to tell the moment he broke?

Jake: I feel like Bale’s performance in Salvation was impeded by the script, and the direction, but in this rant, he could go wherever he wanted. And he went all out, he even dropped his film accent. The most hilarious thing about Terminator: Salvation is the Bale Batman voice, as Batman, he has an excuse, he’s disguising his voice, but as John Connor, it makes absolutely no sense. Was John Connor a chain smoker, or did he just lose his voice recently? I legitimately think Bale’s a great actor, he’s a bit method, but he uses it well. He does great performances, be it in cult hits (American Psycho) or huge Hollywood blockbusters (The Dark Knight). He’s also insanely physical, have you seen his weight loss for The Machinist? It’s actually frightening. 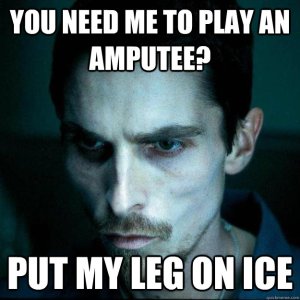 Emma: I love The Machinist! That and American Psycho are probably my favourite Bale movies and both demonstrate really well his talent and incredible physical transformations. He’s undoubtedly a highly skilled actor, it would be silly to say otherwise, but it IS a shame he can be such a dick. Isn’t it cooler when people you revere seem nice as well as talented.

And don’t even speak to me about the Batman voice! Thank god he wasn’t in method-acting-mode when he started ranting at the lights guy, because if he’d done THAT in the Batman voice I’d never get anything done again and just spend my life listening to it. But that’s the wonderful thing about his rant in general and the reason I love listening to it. as well – the sheer comedy and entertainment value. And I’m guessing Terminator Salvation was severely lacking in that area? 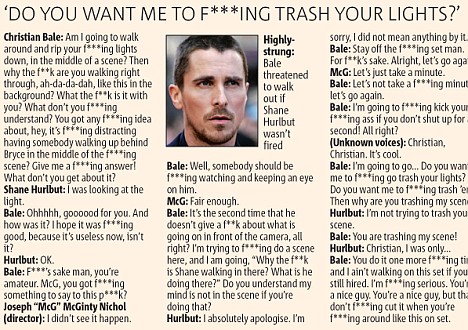 Jake: Totally, it’s great to hear that talented actors like Tom Hanks, Hugh Jackman etc., are nice guys, and it’s kind of disappointing to see this kind of behavior from one of Hollywood’s greats. Then again, it’s also hilarious “macho-man” posing.
Hearing this rant in the Batman voice would be unbelievable, there would be no need for other entertainment. Especially not Terminator Salvation. You’re right, it has absolutely NO sense of humor. I’m guessing they were trying to lean away from the self-parody routine of Rise of the Machines, but in my opinion, they went too far. While the first Terminator has pretty much no comic relief (excluding the cheesy Arnold puppet), the second has some amusing moments with Arnold’s T-800/”Uncle Bob.” And Salvation has none of that. It has Sam Worthington as a Terminator, but he has about as much humor you’d think Sam Worthington to be capable of, which is none.

Emma: So that’s definitely something the rant has and the film doesn’t – humour and personality. That’s a point in the rant’s favour and I know Terminator movies aren’t exactly known for their “hilarity” but some atmosphere and character is always good. Hey, that’s a point – do you think Bale only did the rant to add some fun on set? Maybe he was just taking one for the team?

Okay maybe not. But Jake, so you know the movie pretty well so can you think of something about Terminator Salvation that is genuinely better than the rant? Excluding CGI, editing etc., but surely it has something in its favour?

Jake: I wish there was a way to justify the rant as ‘all in good fun,’ but everyone responding to him in the recording sounds genuinely terrified that he’ll snap…

It’s really, really hard to say anything positive about Salvation…Sam Worthington’s performance is better than an average Sam Worthington performance, I suppose. If we exclude CGI, there’s a few well-done action sequences, but they’re nothing spectacular. Of course, there’s always the CGI Arnold Schwarzenegger…

Emma: CGI Arnold Schwarzenegger, absolute genius! Thanks Jake. And I admit I had to google Sam Worthington just to be sure who he even was….

To be honest I’m surprised Christian Bale even wanted to be in this movie! And I wish there was a way to justify his rant too because I do actually LOVE listening to it, though it’s hard to say why. Just genuine….shock I suppose? Like when you hear people at work arguing and it’s a mixture of hilarity and cringe. He sounds so darn childish, his arguments become really silly (“I’m not walking, he needs to stop walking”) and he reminds me of a toddler everyone is trying to stop from having a meltdown. But a very famous, powerful toddler…..seriously, if someone had said “shut the fuck up Christian you complete cretin” I would have campaigned for a medal for them.

Jake: His arguments are so hilarious. It’s like he’s so self-serious, but he’s talking like a child, which creates some of the best moments in the rant, which in my opinion are as follows:

1. Bale’s sing-songing: “Then why the fuck are you walking right through? Ah-da-da-dah, like this in the background.” I just love to imagine what the hell he’s doing when he says this, like, is he waving his arms around?

2. Bale’s weirdly aggressive sarcasm: “Ohhhhh, goooood for you. And how was it? I hope it was fucking good, because it’s useless now, isn’t it?” This is so harsh that it’s actually kind of scary.

3. Bale’s justification: “I’m trying to fucking do a scene here, and I am going “Why the fuck is Shane walking in there? What is he doing there?” Do you understand my mind is not in the scene if you’re doing that?” Like, seriously? What scene in this film requires such delicate concentration? None of them. The correct answer is none of them.

Emma: Some awesome choices there!! I can HEAR his voice as I read each one (and yep, it’s making me chuckle again). His sing-song! I really, truly hope he was waving his arms around. Okay, here’s three of my favourite bits –

2. “Shut the fuck up Bruce” – I love how he turns on everyone. He won’t listen to reason, he won’t take a minute to calm down and he shoots down anyone that questions the way he’s handling the situation. It’s clear he believes himself to be the most important person in the room and speaks to everyone – including the director (McG) and assistant director / producer (Bruce Franklin) – like absolute shit. At least he doesn’t discriminate I guess.

3. “Seriously man. You and me, we’re fucking done professionally.” – it’s the way he says the word ‘done’ – it’s brilliant! 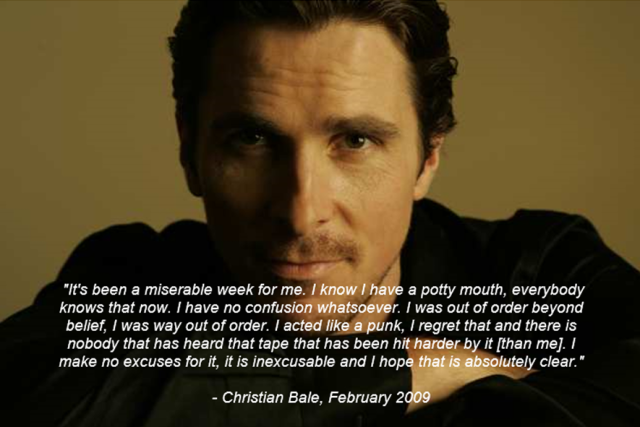