That big ball of fluffy awesomeness Jordan is running a Philip Seymour Hoffman blogathon over at his site Epileptic Moondancer. As such – here is a review of my favourite Hoffman film

I’m sure I won’t be the only person who chooses to review Capote so I won’t drone on for too long about the plot. Basically it’s a biopic about the sensational writer Truman Capote.

The film focuses specifically on Truman’s masterpiece In Cold Blood (1965) and much of the film is set in Holcomb, Kansas where he went with friend Harper Lee to investigate the aftermath of a hideous family murder. Truman was initially just going to write a newspaper article but soon realised there was a much bigger story involved and decided to write the world’s first ever “non-fiction novel” – In Cold Blood, which was also turned into a film, in 1967. But whereas In Cold Blood (the movie from 1967) deals with the direct aftermath of the crime, the film Capote simply depicts how Truman wrote his book in the first place.

It’s an interesting story, mainly because of the murderers themselves and Truman’s relationship with them. Perry Smith in particular he grows very close to.

I’m a big Truman Capote fan, which is why I watched the film in the first place. But it really doesn’t matter if you’ve heard of him or not, in fact the story may be even better if you’ve not read In Cold Blood, as it will have more mystery and intrigue.

I wonder if it was fun for Hoffman, playing someone as outrageous and unapologetic as Truman Capote. Truman was an interesting man, undoubtedly very smart and talented and from reading his work I believe he was an empathetic man as well. But he had an air of selfishness. And he wanted to be adored. Of course he was a great contender to the pretentious world of ‘society’ as well, showing off with various celebrities and travelling all around the world. (I would have loved to have been there).

Capote differs to its 2006 counterpart Infamous by showing Capote in a more warts and all fashion. He was a self-centred bastard at times (obsessed with being the best really) and he is depicted here at letting nothing get in the way of In Cold Blood. His obsession with Perry borderlines on….well I’m not sure what it borderlines on. Love? Lust? Or getting to the top of the book charts. Their relationship is further explored in Infamous, but within Capote, you definitely see the more egotistical side of Truman, however ambiguous it might be. 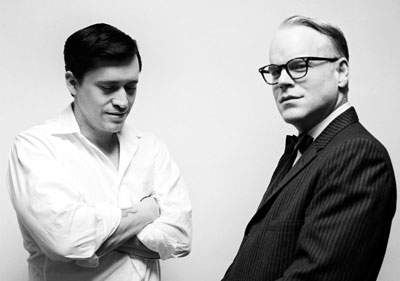 Capote is a very emotional and poignant film. Whether you’re a fan of the guy or not, whether you’ve read his books or not – it doesn’t matter, it’s a film to make you think. About life, about people, about choices and chances. One of my favourite film quotes is actually in this movie. Truman is discussing the sensitive Perry and muses how he and Perry are very similar people who simply had different chances in life. He says –

“It’s as if Perry and I grew up in the same house. And one day he stood up and went out the back door, while I went out the front.”

Isn’t that nice? I wish people could have more empathy for those around them. Life isn’t always a bowl of salad you know – and thank goodness for that as I prefer potatoes, chorizo and cheese anyway. And mayonnaise. Am I going off topic? I just loving talking about food. PASTRY!

Anyway, Hoffman’s performance in this film is undoubtedly brilliant. Just like all of his performances. I do think there could perhaps be an extra sparkle of brilliance in his Capote role though. Let’s face it, Truman was fairly ‘camp’ and of course there was his distinctive voice to perfect. I always think of the late Hoffman as a manly man and to transform into this squeaky voiced, society-obsessed intellectual, well, he just did it…..brilliantly. We’ll miss you Philip Seymour Hoffman.