Magic Mike XXL picks up three years after the original movie and Mike (Channing Tatum) is out of the stripping game and running a furniture business. But life doesn’t always go according to plan and after speaking to old stripping pal Tarzan (Kevin Nash) Mike is tempted out for one last shebang with the Kings of Tampa.

So this isn’t a movie to be taken too seriously. It’s about male strippers for fuck’s sake – a subject that even in real life is often met with laughter. If you spy a leather-clad crotch gyrating to 80s rock music you can consider it a success. And when else could you say that?! At a Bon Jovi concert maybe but that’s the limit.

The plot is pretty thin and the story basically revolves around the guys driving to a stripper convention to dance sexily. On the way they stop off at various places to drink booze and cheer up women. So it’s kind of a road trip movie.

The film doesn’t waste time on silly things like storyline or character development (maybe they just stuck with muscle development as the boys are looking huge) but to be honest it really doesn’t matter.

In the original Magic Mike the conscience behind the perils of stripping and doing drugs didn’t really mesh with the ‘let’s giggle at naked men’ ideal – so I was pleasantly surprised to find that XXL had dropped the moral compass in favour of more jokes and no consequences. It’s unashamedly racy and actually quite sexy at times. 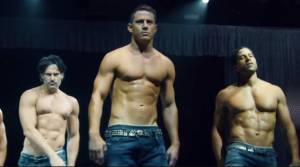 I have read a few complaints that the dance moves were ‘too rude’ and yes they were rather explicit, but you know what? I loved it. It was fun! The film makes a big show of empowering women. Giving us ‘what we want’ so to speak. And watching attractive men with tree trunk arms – like Joe Manganiello or Channing Tatum – is undeniably quite nice.

One of the things I really liked as well was the humour – I found it much funnier than the original movie and there were some genuinely comical scenes. If you hear anyone talking about the ‘Cheetos and water’ scene, well that was just great.

And Joe Manganiello is so impressive! I would literally pay real money for him to pick me up for a few minutes. That’s all I ask. Just pick me up Joe, please?

Magic Mike XXL is a chick flick at its core, something to watch with friends and have a giggle at. At 115 minutes I was surprised by how quickly the time went, I’m the worst person for sitting still in the cinema but it must be said – it was entertaining. The dancing is brilliant and impressive to watch – Tatum fans will be glad to hear there is a workshop scene involving bare arms, smooth moves and a welding mask. A welding mask! What a feeling.

To be honest for a sequel to a male stripper movie they did as good a job as possible. They ditched the pointless morality and just made the film a celebration of muscles, groins and very happy ladies. So I guess you just have to decide whether to let yourself go or not. I did and I must say I really enjoyed myself. High five!