Afflicted is a 2013 found-footage horror film. It’s pretty low budget – one of those films where the actors are friends with the director and they use their real first names. In this case the directors, writers and lead actors are the same two guys – Derek Lee and Clif Prowse. And let’s start this on a positive note by saying truthfully – they did a good job.

Don’t let the found-footage or low budge thing put you off – Afflicted was definitely a good movie and I enjoyed it. The story centres around an American guy called Derek and his best friend Clif (see, I told you) who are embarking on a once-in-a-lifetime trip around the world. We find out that Derek has just been diagnosed with a brain aneurysm and is subsequently taking a ‘grab life by the horns’ kind of outlook.

Unfortunately, not that long into their journey Derek kisses the wrong girl in a Parisian nightclub (sounds like the title of an indie song) and after spending the night together begins to find strange injuries on his body that lead to a life-changing transformation. And he begins turning into something rather unpleasant.

I liked this film. I liked it from the moment it started playing. Though it’s found-footage style (usually an Alarm Bell), it is well-made found-footage. Luckily for us, Clif the Best Friend is a documentary maker and one of the goals for their trip is to make ‘The Best Travel Blog Ever’ so there is some semblance of good filming and editing in the footage. It’s actually fun to watch and I liked both guys immediately – they were normal, nice people and I even laughed at some of their jokes.

At the beginning of the film, which has a very short run-time by the way – around 85 minutes, I had to keep reminding myself I was watching a horror. It felt more like a life-affirming documentary, showing how people like Derek ‘never give up’ in the face of adversity. There are interviews, captions, fun music – I almost didn’t want anything bad to happen and I usually hate shit like that.

It kinda made me feel like I do when I watch The Fly and I really want a happy ending for Seth and Veronica instead of the all gore, maggot babies and protruding wrist bones.

Happily though, when the scary shit does kick in that’s a lot of fun to watch too. It was a pretty jumpy film and genuinely spooky, tense AND rather uncomfortable to watch in places. And because I did like the characters, unbelievably I actually cared about what happened to Derek. It seemed kind of a shitty thing to have happened after he’d already had a pretty shitty time.

Of course it’s not perfect, but what film is? As the story progressed there were some scenes that didn’t flow quite as nicely as what they could, some questions left unanswered maybe – but I’m not going to split hairs when I enjoyed it. There are bits that are are slightly ‘unrealistic’ or ‘not what would have happened’ perhaps but a lot of that kind of stuff comes down to opinion anyway.

The small budget doesn’t let down the special effects which I thought were pretty good also, not to mention creepy. It’s all rather a slow process for Derek – though happily not for the audience – because as the title suggests, his icky transformation plays out like a disease.

At first Derek notices more ‘subtle’ changes such as super strength and an aversion to sunlight and spaghetti (gooooood scene – gross), but as the film goes on, the physical changes become more apparent. 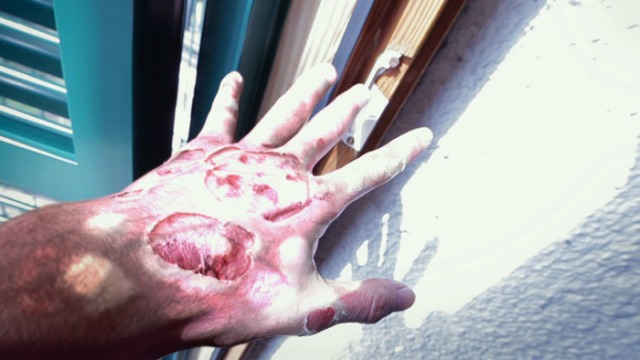 All in all I would recommend this film. I watched it on Netflix so if you’re a card-carrying member as well – you’d be silly not to. I found it original, refreshing and a lot of fun. I also jumped a lot and did that thing where you let your eyes go all blurry just in case something scary happens so you can’t quite see it properly (or is that just me?).