So thirty years after its original release I finally sat down and watched Australian horror The Babadook. Well, okay it wasn’t really thirty years, but it felt like it – it was actually closer to six months.

And after much anticipation – “the scariest film ever made!” – I didn’t want to build it up too much because often that just leads to disappointment. So I didn’t read many reviews and I didn’t look up anything. I just waited until…..well I was ready to scare the shit out of myself I suppose. 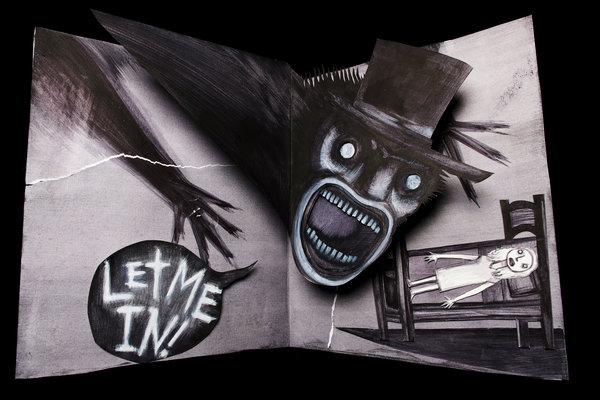 Anyway, the story appears fairly simple – Amelia is a widow and single mother, struggling to keep things together as she brings up her difficult young son Samuel and works in a care home – all the time still mourning for her good looking husband who died whilst she was in labour with Samuel.

To make this already unhappy situation just that bit more unhappy, Samuel is an odious child who screeches, kicks and has an obsession with monsters and weapons. He’s not even particularly pleasant to look at. I’m sure he’s sweet in real life, but in the film he is a loud, draining child who pulls some damn weird facial expressions.

So the household is not the happiest and has rather a lonely feel. They are struggling and don’t have much help from family or friends. There is emphasis put on Amelia and Samuel being isolate and alone. It’s a daaaaark film maaaaan – both literally and figuratively – I’d even go as far as to say it’s slightly depressing.

But I don’t want to give too much away. Most films are best watched with as little knowledge as possible and I mean unless you’ve been living in space or inside a submarine for the last six months you will know they find a book and then the creepy, old Mister Babadook makes an appearance in their home, hiding in the shadows and terrifying them both.

So did I like The Babadook? Yes very much – I was glued to the screen and definitely thought it was highly original and extremely well written. But did I think it was the most terrifying film ever, ever, ever, ever, ever made? No. But it was still scary.

In places the film felt more horrible than anything but I guess everyone will their own view and in fact I’d wager it won’t even appeal to everyone. No joke it almost felt a bit ‘arty’ in places and I’m not saying that in a pretentious way because I’d take an Eli Roth horror over arty any day (and I still liked it).

All in all, I’d recommend this film very highly. Any fan of horror – well it goes without saying you NEED TO WATCH THIS – but don’t expect a run-of-the-mill things that go bump in the night kinda set up. The Babadook actually has a lot more to offer – if you decide to let him in.