So I went to the cinema and watched Annabelle last night. Being a fan of any spooky movie and having previously enjoyed The Conjuring (which Annabelle is the prequel to – with hardly any connection at all) I was looking forward to a good scare.

I’m pretty sure most people who are bothered about reading this review are probably aware of the story buuuuut for those in the dark – the film centres around a fairly likeable couple – meaning for once they aren’t TOTALLY odious – who become the proud new owners of a gross, hideous, ugly and (even better!) demonically possessed doll. Yay….

The film is a slow burner. Not sure if this is a good thing or a bad thing. Whilst making an obvious effort to set up characters and have some semblance of a story-line we ‘care about’ it’s not full of cheap scares either. But let’s be honest, cheap scares in (kinda) cheap films are usually fun. For instance the doll never blinks her eye or looks round in a coquettish, flirty manner – it’s just not that kind of horror. SPOIL SPORT.

Two scenes in the movie I found sort of frightening and there was moderate tension, which I’d credit mainly to composer Joseph Bishara (the man responsible for the Insidious soundtrack – and who played the ‘Lipstick Face’ demon). The music in Annabelle was damn creepy and effective. 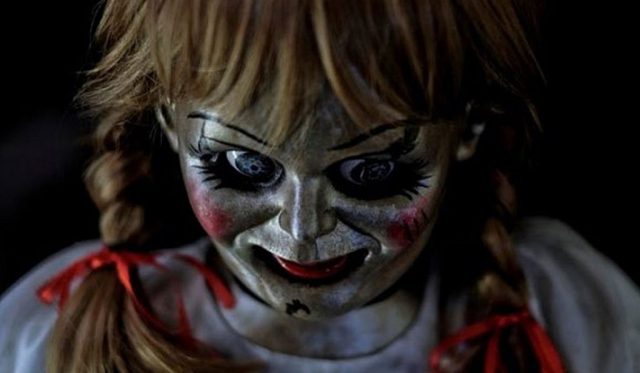 The story mixes a few different scares – we have the usual demonic type stuff which is fun. The mandatory priest who means well but usually dies before he can actually help anyone – silly old tosser. Moving  us on to the heavy and dusty books that now must hold the answers!  There’s ghostly apparitions (nice) and also, thrown in for fun – real life violence and trauma. Eek.

There’s not much I can negatively say about Annabelle, I enjoyed it, probably won’t watch it again for years. It could have been scarier but it was good enough. The Conjuring was relentless in places, but I felt Annabelle gave the viewer time to recuperate after a scare. The story was also a bit convenient in places (but of course!) but we could say that about many, many films. Perhaps every film ever made because then it wouldn’t be a film.

And I would just like to add one little thing before signing off (you can tell I’m losing interest can’t you) – but WHO in their right mind, would ever want to buy that horrible, dirty old doll? It’s fucking shite!

Films, books, soundtracks, good humour
View all posts by emmakwall →
This entry was posted in Reviews and tagged Annabelle, Halloween, The Babadook, The Conjuring. Bookmark the permalink.