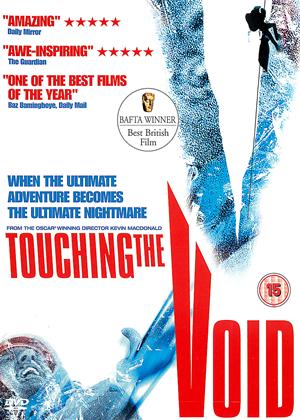 Many thanks to MovieRob for inviting me to join in with this month’s exciting Genre Grandeur. I absolutely love the genre choice made by Quiggy of The Midnite Drive-In – Documentary Films. A type of film which, if made well, can be more compelling and unforgettable than even the best action packed, big budget, fiction movie.

You can read the original post here on MovieRob.

Well it’s not a Christmas movie (I’m writing this at Christmas) but there is a lot of snow. Touching the Void is a 2003 British documentary film telling the true story of Joe Simpson who, in 1985, climbed the Siula Grande mountain in Peru with his climbing partner Simon Yates. A big, vast, snowy, icy, scary, rocky kind of huge mountain which I believe hadn’t been conquered before. 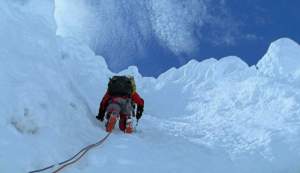 They did well and achieved their goal but on the way down had an accident which resulted in Joe breaking his leg pretty badly and led Simon to do something which rocked (no pun intended) controversy in the climbing world. Simon cut the rope which was holding the two men together. Joe fell and then hung perilously over a terrifying, dark crevasse inside the ice. With literally no other feasible direction to go in, he made the decision to fall into the crevasse, deep inside the mountain.

I know there’s a few mild spoilers there and I do apologise for that (it came out sixteen years ago, get over it) but really most of the film is set after the accident, following Joe’s literally AMAZING journey back to civilization and safety. And I’m not giving away ANY spoilers with that one because the film is made in the format of reconstruction (which is very well done) and interviews with both Joe and Simon. So you know he’s alive. He wrote a book about it even, which this documentary film is based on.

The reconstruction / interview format is perfect and the true brilliance behind Touching the Void is really due to the huge sense of honesty you get from both guys. The story itself is incredible and breathtaking, of course. I mean what Joe goes through really is astounding, every time I watch it it never ceases to amaze me. How the guy got out alive can only be a mix of good judgement and complete fate. But the way the story is told, by both men – who you can see are still affected by the event years later – does make it extra special. You get a real sense of who they were back in 1985, what it all felt like, what they went through. It’s gripping. And still gripping every single time I watch it. 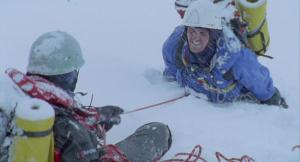 You definitely don’t need to be into mountaineering to enjoy Touching the Void. I’m definitely not into mountaineering. Unless the definition of mountaineering suddenly changed to ‘being safe and comfortable on the sofa’. It’s actually described on the IMDB as a sports / drama film, which is my worst nightmare. It’s just a really great story. You don’t even need to be into documentaries to enjoy it. Much if it is made up of decent reconstruction scenes and it’s as close to a ‘Documentary FILM’ as it gets. It’s just a really incredible story (have I mentioned that once or twice?) one of those ‘against all odds’ type of things. Plus very well told, constructed, totally believable and completely mesmerising. I genuinely can’t imagine anyone not enjoying Touching the Void. WATCH IT!