Though set in the present day Superbad has a delicious

ly 70s vibe. I’m (incorrectly) assuming this is because Seth Rogen and Evan Goldberg (the co-writers and basis for the two main characters) grew up in this era and wanted to give the story an authentic nod to their own teen years.

Just the title itself is a giveaway of its retro feel (I can barely say it out loud without doing a bad Curtis Mayfield impression) but there’s other things too. Like the boys having to take the bus everywhere after Seth’s car gets clamped (“don’t be such a vagine man”) or the funky blue shirt and check trousers he borrows from Evan’s dad. Even the logo for Columbia Pictures, the film’s distributor, is in its old style from the 1970s.

Though the main thing of course is the soundtrack. Which is just bursting with Blaxploitation music and funky 70 sounds….so superfly!

Now I’m a huge fan of Superbad. It’s one of my favourite comedies, I’ve lost count of how many times I’ve seen it (“hey McMuffin”) and even without the cool soundtrack I would have still loved it. But let’s be honest, a soundtrack like this does give a teen comedy film just that bit more kudos. 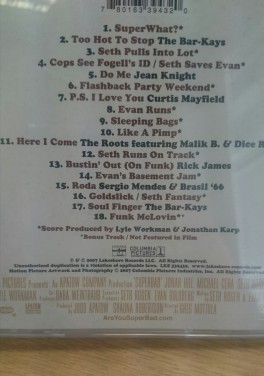 I bought the soundtrack not too long ago, it was dirt cheap and second-hand, all the way from America. The case has seen better days but the CD itself was pristine. I mainly got it for (this old classic again…) listening to in the car but it’s still a nice addition to my collection.

The track listing as you can see, is mainly made up of actual pop songs but there are some original pieces of music as well, written by Lyle Workman and Bootsy Collins. Workman does the music for many of the ‘Judd Apatow’ movies and Collins is a funk musician most famous for working with James Brown.

And all in all, they nailed it. Superbad is a great soundtrack that could be a 70s soul compilation in its own right (not every single song is from that era, but most are).

All the tracks feel familiar and if you know the film well, like I do (“he looks like fucking Zac Morris”) you’ll be able to pin point the scene where the music plays. Even the scores are pretty easy to distinguish, like when Fogle gets punched in the off-licence or Seth imagines robbing the supermarket.

Though the rest of the soundtrack is pretty groovy there are some slower, more romantic tracks too – including a gorgeous version of ‘P.S I Love You’ by Curtis Mayfield himself.

strikes me as so damn perfect. The lyrics fit Seth and Evan’s situation so well, their friendship and the *gulp* terrifying prospect of going to different colleges and no longer spending every day together. Check out the lyrics here and the song here.

My two favourite tracks are ‘Too Hot to Stop’ by The Bar Keys, which is easily one of the most recognised songs from the film (it plays at the beginning whilst Seth and Evan are doing their little silhouetted dance which reminds me of Eddie and Richie from Bottom).

The other track I really like is from 2006 – The Roots ‘Here I Come’. This plays at the scary-older-people party when Seth gets the, er, period blood on his pants. I am SO convinced this must have happened in real life to either Rogen or Goldberg or at least someone they knew at school. It’s simply too weird to make up.

And though this scene isn’t included on the soundtrack (though the original song by The Guess Who is available on the deluxe edition), I’m going to leave you with this clip (“Hey, who’s that guy?“) because it’s simply my favourite bit in the movie.