This is dedicated to two of the hardest working bloggers I know – Darren and Rob – who are just coming to the end of an absolutely brilliant Stephen King blogathon. Check out their sites for loads more reviews, it’s been a lot of fun.

Creepshow 2 is one of those sequels that is pretty much on a par with the original movie. If you’re thinking “but I heard that was rubbish!” – well you’re thinking of Creepshow 3 I’m afraid which was utter nonsense just made to cash in on the name.

But Creepshow 2 is pretty much the exact same drill as Creepshow (1982) – a horror/comedy anthology film written by Stephen King (based mainly on his short stories) and George A. Romero.

One difference is there are only three stories in Creepshow 2 as opposed to the five given to us in Creepshow – apparently this was down to budget constraints which does make sense given the shorter duration (40 minutes less than the original) and lack of bigger name stars.

Not only does Stephen King not star in a story this time (shame as The Lonesome Death of Jordy Verrill was my favourite segment in Creepshow) but there’s no Ted Danson, Leslie Nielsen or Adrienne Barbeau either – sob! Billie was one of my favourite characters in Creepshow. I just call her Billie…..because everybody does.

Anyway, rather than dwell on that, have let’s look at the three stories Creepshow 2 does have to offer us, before they’re all darn good.

“This hair’s getting me to Hollywood man!”

This is the first story about a wooden Indian statue that comes to life to avenge the murder of his owners whose store is invaded by three local thugs. The ringleader is intent on using their ill-gotten gains to get him to Hollywood where he believes he can be a famous actor, largely because he has long silky hair. Seriously.

This story is pretty funny but the bullying of the store owners isn’t very nice. It’s not scary at all (obviously) but perhaps potentially the creepiest one to play on your mind later. Imagine Old Chief Woodenhead hiding behind your bedroom door!

This is my favourite of the anthology, a classic ‘teens having delinquent fun before they get fucked up’ story but rather than a deranged serial killer with a chip on his shoulder, the villain in this piece is a very strange “oil slick” monster which traps the four teenagers on-board a raft whilst they are enjoying an afternoon of sun bathing, getting high and sexing. The bastards.

It’s my favourite story because there’s an annoying douche-bag in it who is even worse than The Hair Guy in Old Chief Woodenhead, it’s a lot of fun and also – a little bit gross too. The oil slick burns and melts any poor person that it comes into contact with you see. Yay.

“Thanks for the ride, lady”

I’m probably wrong (it did happen once in 1989) but this seems to be the most famous segment of Creepshow 2. There’s certainly a lot of fan art dedicated to it in any case.

It’s kind of a I Know What You Did Last Summer set-up. A rich and annoying woman is driving home in a self-obsessed bubble after shagging a gigolo – presumably without her husband’s blessing – when she knocks down and kills a poor old hitchhiker. Instead of stopping she drives off and then, for the rest of the journey she is haunted by him as he constantly appears on and inside her car, saying over and over “thanks for the ride lady”.

You can imagine how it ends. 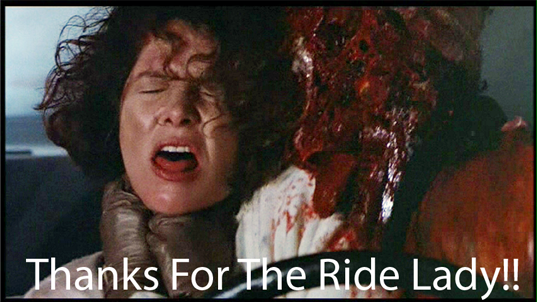 Well, have a great Halloween everyone!