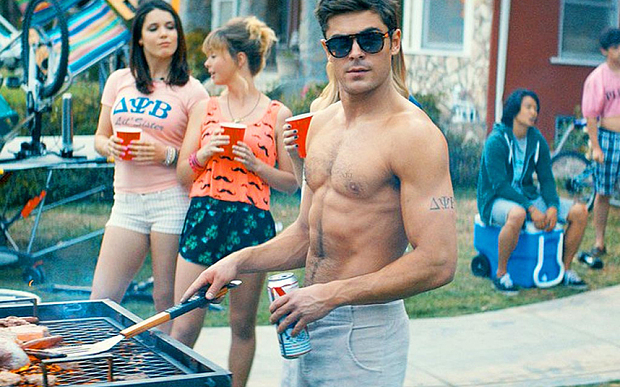 So in a totally shallow (and pedantic) way, this scene is probably the best thing in the whole movie. And whilst not the biggest of insults – this scene is pretty fucking epic after all (heart shaped eyeballs) – there is not a lot else going on.

I had fairly high hopes for Bad Neighbours. And yes I’m spelling it the English way because I can’t bring myself to leave out the “u”. Pretty decent cast twinned with an irreverent, fun story-line equaling light hearted fun (plus Zac Efron topless). Sounded alright.

The story follows new parents Mac and Kelly (Seth Rogen, Rose Byrne) who are horrified when they discover a group of frat boys (led by those naughty lads Zac Efron and Dave Franco) have moved in next door, shaking both noise levels and the paranoia the couple have associated with having a baby and ‘getting old’.

It is a little odd seeing Seth Rogen playing the ‘concerned dad’ but he does eat pizza in bed, wear a comedy (using the term lightly) t-shirt and puff on a bong so it’s definitely still him. Listen I’m sure he’s a nice bloke but christ do we need much more of it?

Unfortunately Bad Neighbours misses the mark really – for me anyway. I mean it’s fun enough and watchable because Zac Efron gets his top off but the storyline and character development was so sketchy and to be honest SILLY, that I was never able to believe in it enough – or at all. More suspension of belief will be needed than when you watched Inception. It’s a dream inside a dream inside a manifestation of a dream. You what mate?

I suppose I could be accused of being somewhat unfair and maybe I’m just not the biggest fan of these type of comedies. But thinking about it coherently I love Zoolander and that was pretty fucking silly.

For the positive part (and not just STDs) – everyone played t

heir part well. I liked Rose Byrne barbecue her character was more psychotic than Rogen’s and she was also fond of the F word (FUCK!). It was nice to see a woman in a comedy with a bit of spunk, rather than just moaning at her husband’s antics.

And of course  Efron and Franco were ideal as the good looking, arrogant frat boys. Seth Rogen was playing himself as usual Seth but he just had a baby this time.

It’s just that a lot of the jokes felt way too far-fetched and not relevant to the story –  it jumped from one outlandish situation to another. McLovin from Superbad was in it and he had a 16 inch penis. What is that, like a medical condition or supposed to be funny or…? I don’t get it.

So anyway yeah I was slightly disappointed but that’s not to say it’s all bad. I mean I’ve already mentioned Zac Efron taking his top off but there are of course funny moments and it would be churlish to say otherwise. I just knew (as I was laughing) I probably wouldn’t ever watch it again.

Pure psycho madness. God bless Dave Franco. I wish there could have been more surreal bits like this.