10 of my Favourite Books

1. The Diary of a Nobody – George & Weedon Grossmith

First published in 1892 by the Grossmith brothers, I absolutely LOVE this book. It’s basically a diary written by protagonist Charles Pooter who is a middle class office clerk living a relatively quiet life with his wife Carrie, son Lupin and small group of friends. But the catch here is….he’s an idiot. He’s a nineteenth century David Brent who makes terrible pun jokes and desperately wants to be a member of high society. Fantastic and very, very funny.

2. In Cold Blood: A True Account of a Multiple Murder and Its Consequences – Truman Capote

Truman Capote was most famous for penning Breakfast at Tiffany’s and hosting outrageous parties. In fact Marilyn Monroe – one of his close pals – infamously referred to Queen Elizabeth II as a cunt during one of his celeb gatherings – funny how you don’t see that quote written on her internet memes? Anyway, it is In Cold Blood that is Truman’s real masterpiece. It tells the true story of an entire Kansas farming family who were slain by two thieves in 1959. The book was actually a major breakthrough because it was the first ever non-fiction novel to be written – Truman was a true pioneer. And just as all of his work, Truman’s use of language, his description of people and surroundings is second-to-none. It’s such a vivid, enthralling story which is both spellbinding and heart breaking. 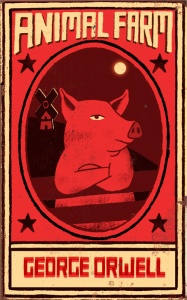 Animal Farm is such a clever and easy to read book. Best of both worlds! Orwell based the story on the Russian Revolution but the core beliefs are relevant today and probably always will be. It’s a short read yet packs a very relevant punch. And I’ll leave you with Orwell’s incredibly clever words about – all animals are equal, but some animals are more equal than others. Because depressing though it might be, how true it is!

4. To Kill a Mockingbird – Harper Lee

Harper Lee only wrote one novel in her lifetime (at the time of writing this post) and To Kill a Mockingbird was it. It’s a testament of how popular and well received it was that the film adaptation was made just two years after publication, as well as winning Lee literary awards such as the Pulitzer. It’s another easy to read, plus it’s warm and funny and the characters really come alive (probably because most of them were semi-autobiographical). It’s a Must Read and also introduces us to one of the loveliest, most level headed, polite and best thinkers in modern day fiction – Atticus Finch. Ahhhh. 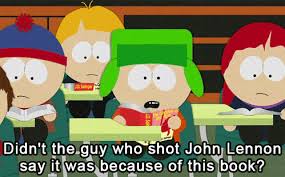 I only read this book because I found it in a charity shop and I wanted to know what it was that made it so controversial. Truth be told I still don’t know and apart from the whole Mark Chapman thing I think people were just more easily shocked in 1951. And all old people get a little scared at the idea of a youth rebellion don’t they? Having said all that I loved this book. Well it was Holden Caulfield that I fell in love with. I don’t understand why people would call him arrogant or pretentious, I never once saw him like that. All I saw was a sensitive and hugely kind hearted teenager who couldn’t make sense of the shit rubbish that frequents the world;  nastiness, greed, abuse and loneliness. It’s a strange fly-on-the-wall type book as Holden leaves his school to pretty much just walk around New York City. But the way it’s told in first person really gives you an image of Holden and his world and it’s his thoughts and opinions about the situations around him that make the story.

6. Starter for Ten – by David Nicholls

It was my love for BBC2 quiz show University Challenge that made me buy this book seven or eight years ago. And it is now almost in tatters from the amount of times I’ve read it. It’s the best coming-of-age novel I’ve ever read and it is probably the funniest book I’ve ever read too. Set in the 1980s we follow protagonist Brian Jackson who is a geeky, hapless but nice guy who goes off to university and joins the University Challenge quiz team – his dream come true. Brian also falls in love with an unattainable girl, makes terrible jokes and always says the wrong thing. The whole story is very funny but it’s his internal thoughts that are fucking hysterical – and unlike the aforementioned Charles Pooter, Brian knows exactly how he comes across.

Pretty hard to choose a favourite Roald Dahl but if I had to, Matilda would be it. I’m sure we’re all familiar with the story so I won’t bore you too much. It’s classic Roald Dahl, once again showing kids as heroes and adults as often-can’t-be-trusted. I used to listen to this in my dad’s car on audio tape and I still have the same edition of the book I used to read then too.

“It’s a funny thing about mothers and fathers. Even when their own child is the most disgusting little blister you could ever imagine, they still think that he or she is wonderful.”

8. The Turn of the Screw – Henry James

The Turn of the Screw was published in 1898 and at this time spooky stories were a lot more  obvious. A ghost wearing a white sheet and holding chains – that kind of obvious. What James did was scare his audience by writing about the supernatural in a more subtle, believable way that was far more frightening for readers. He was pretty pioneering. This story follows a governess who, having started a new job looking after two small children in an Essex manor house, starts seeing ghostly apparitions. Strange things going on, the governess becomes convinced the children are friendly with the ghosts and the real twist in this tale is that you never quite know what the truth is.

9. All Quiet on the Orient Express – Magnus Mills

I’ve never really found an author like Magnus Mills before. He writes the strangest stories and has the strangest style.  I’ve read all of his novels but this is definitely my favourite. It’s seemingly a simple tale – an unnamed narrator is holidaying in a small English village and ends up friendly with a local farmer and staying longer than planned in his caravan. Not really that scandalous, no? Well if you add a gold crown, some cans of green paint, a precarious teenager and a lack of baked beans then you may well get to the more sinister undertones this book has to offer. A truly unique and memorable book that creeps up on you before you even realise is. A modern day classic.

This refers to all the HP books but my personal favourites are Prisoner of Azkaban and Order of the Phoenix. I don’t think they’re any better than the others, I just particularly liked the stories (and especially the characters). I didn’t read a Harry Potter book until four of them had been published (none of us like being pushed into stuff do we and I was determined to avoid the craze). But one chapter into Philosopher’s Stone and I was hooked. I’ve never been one to wear a wizard hat and queue outside WH Smith (though kudos to those who did) but I still remember each release date of the last three books and by gum was it exciting. Still love them now.

37 Responses to 10 of my Favourite Books